Basic theory and simulation group (BTS)
IPR BTS group is an integral and important part of Institute for Plasma Research, Gandhinagar. Since its established. The Group is dedicated to Theoretical and computational studies in plasma physics. This page provides a glimpse of research activities being carried out in our group and introduces people involved in research/technical activities.
Read more >>
Basic Experiments
Accelerator Division: This division was set up in 2009 to pursue R&D work in the areas of plasma based accelerators. In the 11th 5 year plan, work was initiated to develop a plasma source for use in experiments of plasma wakefield acceleration with the proposed LINAC in the 12th 5 year plan.
Read more >>

The Large Volume Plasma Device (LVPD) is a decade old, attractive, efficient, rugged experimental facility in IPR, contributing actively towards understanding physics problems concerned to fusion devices and Earth’s atmosphere. A brainchild of Prof. S. K. Mattoo, the device has made its contribution not only towards understanding linear and non-linear properties of Whistler waves but more recently made significant inroads in understanding Electron Temperature Gradient (ETG) turbulence in laboratory plasmas, a major cause of concern to fusion fraternity.
Read more >> 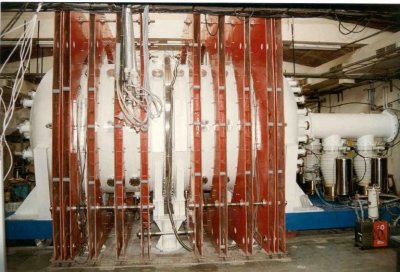 Microwave Plasma Division
It is well established that e.m wave propagation is not supported by an unmagnetized, over-dense plasma. However, depending on the intensity of the incoming wave, several interesting linear and nonlinear interactions occur between the wave and  plasma at the critical layer (ω=ωp), leading to the absorption of the wave.
Read more >>
Nonneutral Plasma Division
Conventional plasma, by definition, is a quasi-neutral collection of mutually interacting electrons and ions having a collective effect. In contrast, there is an exotic world of plasmas, which are ‘nonneutral’ having only one species. Such plasmas are therefore an exception to the definition. Pure electron plasmas are perhaps the most popular, although ion plasmas, positron plasmas and anti-proton plasmas are also possible. They all have certain peculiarities significantly different from their neutral cousins but are called plasmas because they too, like their neutral counterparts, exhibit rich collective phenomena. For more information on the underlying basic physics, one can have a look at the web pages, say, nonneutral plasma group at Physics Department, University of California, San Diego, U.S.A.
Read more >>
Multi-Cusp Plasma Device
Basic aim: To confine contact ionized (tungsten surface) cesium ions in a multi-line cusp magnetic field and do its characterization.
Expected Result : A 'text book' like ideal plasma, with Te~Ti, really quiescent, with only 'natural' fluctuations.
Read more >>
Pulse Power and Dev. of RFQ for Accelerators
ADITYA is the first indigenously designed and built tokamak of the country. It was commissioned in 1989. ADITYA, a medium size Tokamak, is being operated for over a decade. It has a major radius of 0.75m and minor radius of the plasma is 0.25 m. A maximum of 1.2 T toroidal magnetic field is generated with the help of 20 toroidal field coils spaced symmetrically in the toroidal direction.The major subsystems and parameters of the machine have been described elsewhere.ADITYA is regularly being operated with the transformer-converter power system.~100 msec 80 - 100 kA plasma discharges at toroidal field of 8.0 kG are being regularly studied. During this period experiments on edge plasma fluctuations, turbulence and other related works have been conducted. Standard diagnostics have been employed during these measurements. Figure below gives a view of ADITYA with the auxiliary heating systems attached to it.
Read more >>
ADITYA 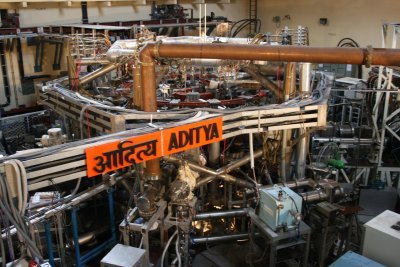 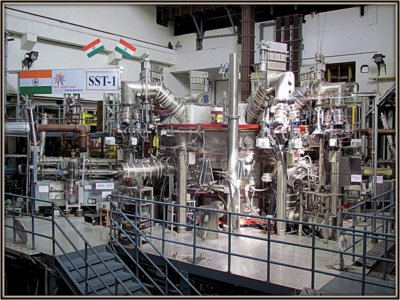 Plasma Diagnostics
Laser Diagnostics
Infrared Thermography is the science of acquisition and analysis of thermal information by using non contact thermal imaging devices. Visible photograph depicts spatial distribution of light or colour intensity similarly “thermo-graph” depicts spatial distribution of temperature values.
Read more >>
Spectroscopy Diagnostics
The main objective of the group is to develop effective spectroscopy based diagnostics for the ADITYA and the SST-1 tokamaks and experimental plasmas in general. Also, to acquire data during the operation of the machines and infer the behavior of the plasmas there from.
Read more >>
X-Ray Diagnostics
This group works as a diagnostics tool for Tokamak plasmas from detecting x-emission from plasmas.
X-ray radiation emits from Tokamak plasma in the different energy ranges e.g soft x-ray emission (100ev-10kev),hard x-ray emission (100kev and above).
Read More>>
Fusion Product Diagnostics
Micro Wave & ECE Diagnostics
FIR Diagnostics
IR Thermography, Charge Exchange & Motional Stark Effect
Probe Diagnostics
Injector System
RF Technologies
High Power ICRH Systems
Since in a tokamak reactor the plasma produced by Ohmic loop voltage can not increase the plasma temperature beyond few keVs, RF power is required to heat the plasma to ignition temperature of fusion reaction which is around 40 keV and the RF power required is around 30MW in the frequency range of 10-100 MHz which is the ion cyclotron frequency (or its harmonics) corresponding to the central magnetic field in a tokamak.
Although the final RF power requirement for generator is 30 MW. The building block of RF system is 1.5 MW. One can combine RF generators with the help of Transmission line and intoduce RF power in the tokamak through multiple antennas.
Read More >>
High Power ECRH Systems
The high power ECRH systems are important heating systems in tokamaksAditya and SST-1 to carry out various experiments related plasma breakdown, start-up, heating and current drive. There are various advantages of ECRH in tokamak plasma. The pre-ionization with ECRH helps in reliable start-up of tokamak even at higher error field in tokamak. It saves the volt-second consumption, which helps in elongation of plasma shots. The breakdown with ECRH is essential in superconducting tokamaks as sharp rise in ohmic (dI/dt) is not desirable because it may trigger quench in superconducting magnets. The ECRH also helps in MHD suppression and instability control like NTM suppression and saw-tooth control.
Read More>>


High Power LHCD Systems
The LHCD system is an integral part of the SST machine and intends to sustain plasma for 1000 seconds for CW operation of SST machine.
3.7 GHz, 2 MW CW LHCD system intends to drive plasma current non-inductively.
It is designed to drive 220 kA of plasma current at an average plasma density of 2x10-19 m-3 having average electron plasma temperature of 1 keV at a toroidal magnetic field of 3 T.
Four klystrons, each rated for 0.5 MW, CW power at 3.7 GHz, is employed to generate the lower hybrid
Super Conducting Magnet Technology
Development of associated technologies for realizing fusion grade and next generation superconducting magnets like joints, termination. Development of advance electrical facility consisting of power supply, protection system and control system for testing of high current superconducting magnet. Development of fusion grade and next generation superconductors and cable-in-conduit conductors including twisting, roll-forming and jacketing technologies and winding technologies for large fusion grade and next generation superconducting magnets.
Read more >>


Divertor & Firstwall Technology
Divertor configurations are commonly used in magnetic confinement devices such as a tokamak to 'Divert'  the plasma so that the plasma surface interaction can occur locally to prevent the core plasma from getting diluted. Since they face the direct line of plasma 'Scrape off layer' which is the plasma edge, they are subjected to very high heat loads. A typical Divertor also consists of components constituting of refractory materials such as Tungsten. These components - also called as "Plasma Facing Components" - are primarily designed for extraction of heat flux and particle flux incident on them from the dense & hot plasma confined in the device. The plasma facing components are mounted on a support structure that constitutes the casette body. The Design of a divertor and the casette body also involves fabrication of such components to sustain various loads such as Thermal, Electomagnetic and Neutronic loads.
Neutral Beam Technology
Remote Handling & Robotics Technology
Cryogenic Technology
Cryopump
Large Cryogenic Plant & Cryo Systems
Ultra High Vacuum Systems
Power Technologies
Fusion Reactor Materials
Fusion Fuel Cycle Related Technology
Neutronics
Blanket Technologies
Facilitation Centre for Industrial Plasma Technologies (FCIPT)
Facilitation Centre for Industrial Plasma Technologies (FCIPT) is a division under Institute for Plasma Research (IPR) which mainly focuses on technology development for social benefits and industries. FCIPT develops plasma based technologies and commercialises through Technology Transfer to industrial partners. Some of the Social beneficial technologies developed by FCIPT are as below.

Will be updated soon...